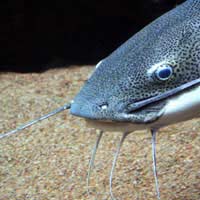 Active hardy and full of character, catfish can make a delightful addition to any aquarium. Whether you're looking for sociable members of a community tank or just somebody to eat up that troublesome algae, there's almost certainly a catfish for you.Catfish are notable for having thick, leathery skins, often beautifully patterned, rather than scales. They also have barbels, whisker-like appendages which provide them with a great deal of sensory information. They are quite physical creatures and you should not be disturbed if you see them trying to touch other fish or even your own hands when you're cleaning the aquarium.

Although they may vary a great deal in their habits, most catfish have certain basic things in common. Since they are bottom-dwelling fish they prefer a soft substrate such as sand or smooth gravel; they often enjoy having larger polished stones to sit on. Make sure that they have plenty of hiding places available. Pieces of bogwood can provide shelter and also give them something to chew on, helping to keep their mouthparts in good condition.

With so many species to choose from, it can be difficult to know what will work best for you, but the following are all very popular choices for the aquarium:

Caring for your Catfish

Although most species of catfish eat algae, it's still important to make sure that they're getting all they need, and they generally benefit from being provided with food pellets or algae discs. Since most species are nocturnal it's best to feed them shortly after lights out - this will also discourage other fish from stealing all their food. If you have an armoured catfish it's especially important for you to make sure it's eating, as you may not notice if it's losing weight - its armour won't shrink just because it does.

Catfish sometimes suffer from bullying by other fish and may become aggressive in response. If you suspect this is happening, make sure to observe the tank carefully so you can determine where the trouble is starting. It's less likely to be a problem if you keep several catfish together. Most species of catfish can live peacefully in a community with other fish, but carnivorous ones will eat fish who are half their size or smaller.

Despite being hardy where water quality is concerned, catfish can be very vulnerable to the side effects of medication. If you need to medicate your main aquarium you should first remove them to a quarantine tank.

Catfish are great fish for beginners and can also be a valuable addition to a mature aquarium. Though they can be shy at first, once they've established themselves they're lots of fun to watch and interact with. You'll soon find it hard to imagine how you ever got along without them!

Keeping Tangs in Your Aquarium
Share Your Story, Join the Discussion or Seek Advice..
[Add a Comment]
I was wondering what types of fish get along well with catfish that are top or mid level swimmers. I have an upside down catfish, a pictus catfish, a plecostimus that all interact with eachother, and an African dwarf frog in a well planted and maintained 20 gallon tank. The tank housed other fish, but they have died over the past few years.
JD - 26-Sep-12 @ 10:51 PM
It's normal for fish to lose scales from time to time. When this happens, the remaining scales grow larger to fill the gap. Unfortunately this does mean that the exposed skin is vulnerable to infection in the interim. It sounds as if this catfish has a fungal infection where the scale is missing. A standard anti-fungal remedy like Interpet Anti Fungus should clear it up, though catfish can be sensitive to some such remedies, so check the bottle before you use it.
Jennie Kermode - 7-Aug-12 @ 5:51 PM
What is wrong with my catfish? It recently lost a scale but i dont know how and a couple of days later it developed a white fluff in a spherical shape, what is this? Help would be much appreciated asap please!!
Char - 1-Jul-12 @ 9:26 PM
I thought I was buying a plec for my 4foot tank which has only neon tetra's in in turns out my plec was a cat fish that liked brimstone for his dinner when the lights were out. I was constantly losing neon' s and thought I had something wrong with tank. I didn't realise until a friend called and said that my plec was a cat fish and the kind that ate small fish . I phoned pets at home up and told them that there plec was a cat fish which ate my fish and they just said mistakes can happen . My advice to everyone make sure you buy the proper cat fish when putting one in a community tank otherwise you may find your fish decreasing in numbers
tina - 17-Mar-12 @ 6:13 PM
What types of mix of cat fish can I have in my tank ? hoping they don't destroy each other. I have 8 different corys and 2 feather tip cats at the moment and want to add a few more.
? - 18-Jul-11 @ 4:55 PM
Title:
(never shown)
Firstname:
(never shown)
Surname:
(never shown)
Email:
(never shown)
Nickname:
(shown)
Comment:
Validate: