Home > Tips > How To Detect Fish Diseases And Injuries

How To Detect Fish Diseases And Injuries 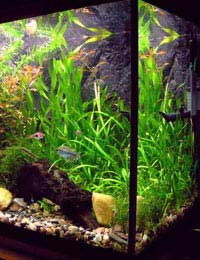 Every aquarist fears disease and no matter how well you care for your tropical fish, it's always a risk. Fortunately, the majority of fish diseases which affect aquarium fish can be effectively treated. The difficult thing is spotting them in time. The sooner you know a fish is ill, the better the chance that you can save it and that you can prevent the infection from spreading to others.

It's easy to tell that something is wrong with a tropical fish when it has open sores, ragged fins, or woolly-looking fungus on its skin, but by then it's often too late for effective treatment, and at best your fish is going to be left with long-term injuries. But there are several things you can do to detect fish diseases at an earlier stage, so that you're ready to act as soon as physical symptoms occur to confirm it.

The best way to find out when something is wrong with your fish is to let them tell you. Fish who are feeling under the weather won't behave the same way as they do when healthy – any more than you would. What's more, other fish won't treat them the same way.

When you see a fish that is normally active start to slow down and behave in a listless, uncertain way, it's a good bet that it has a tropical fish disease. You should also be suspicious if a fish stops eating properly, spends a lot of time resting on the bottom of the fish tank, or starts hiding away more than usual. Sick fish lose energy and confidence. They'll stop using assertive body language – for instance, most species will lower the dorsal fin and let the tail hang limp. They'll back off when challenged by other fish.

As well as body language, the other fish in your aquarium have further clues to go on. Sharing the same water, they'll notice when an individual's scent changes. Because of this, they'll almost always be aware of a fish disease before you are. Occasionally, especially where there is a strong pair bond, fish will try to help a sick individual (perhaps helping it around or bringing it food), but more often their natural fear of becoming infected themselves will lead to them shunning that individual or even trying to drive it away. This can lead to aggressive chasing. If a tropical fish that has previously fitted in well suddenly becomes the target of bullying, it's time to check for signs of disease.

Physical Changes In The Fish Due To Fish Disease

We sometimes refer to people who are ill as being 'off-colour'. This is literally true with many tropical fish. It takes energy to maintain bright colours and sick fish are liable to fade. They'll certainly stop displaying socially or sexually assertive colours as strongly as usual. In some cases, however, internal bacterial infections can actually cause a fish's colour to darken, so any kind of colour change should make you suspicious. You should also look out for small dark patches or reddening, which may indicate bruising. Of course, bruises can be caused by accidents or skirmishes with other fish in the fish tank, but they can also be a result of skin infections or internal haemorrhaging.

Healthy fish should have bright, clear eyes. If the eyes become cloudy or swollen, or if the fish does not appear to be focusing properly, something is wrong. Most fish should have no difficulty following the line of your finger as it moves across the glass. If they appear unable to do so, you should check for other signs of illness.

Swelling of any part of a fish's body should be cause for concern. It can happen as a result of injury, but if that's the case you should see it start to subside after a day or two. Sometimes swelling can start with injury but persist due to infection of the wound, in which case you should be ready to deliver appropriate treatment. Persistent swelling of the abdomen in the tropical fish, if not due to the production of eggs, is particularly worrying, as it can be a sign of serious internal damage. If this happens, try adjusting your fish's diet, but keep a close eye out for any sign of deterioration.

The key to good aquarium management is paying close attention. This is never truer than in the case of fish disease. Though there's no guarantee that you'll always be successful, you can keep your tropical fish a lot safer by being ready to detect disease the moment it appears. Contrary to many people's opinion, there is no reason why fish should suffer from tropical fish disease on a frequent basis. With good care, your tropical fish should be able to lead long, healthy lives, bringing you a great deal of happiness.

Introducing New Fish Into Your Tropical Fish Tank
Share Your Story, Join the Discussion or Seek Advice..
It is hard to tell without seeing your fish. However, there is obviously something wrong and that could stem from disease or something is amiss tank management. You need to seek some advice very soon before you lose any more!
Cal - 18-Sep-15 @ 11:51 AM
I have had unexplained death in four fish over the last month the fish look normal but stop feeding and die iv just noticed my simese fighter now looks pale and bloated he is feeding but doesn't look right to me
christine lewis - 17-Sep-15 @ 9:08 AM
Title:
(never shown)
Firstname:
(never shown)
Surname:
(never shown)
Email:
(never shown)
Nickname:
(shown)
Comment:
Validate: