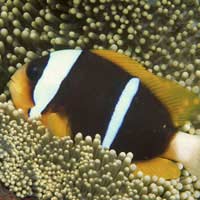 Although tropical fish vary a great deal in size and body shape their basic anatomy is essentially the same. Understanding how your fish are built can help you to understand their needs and to detect disease.

The most obvious difference between fish and mammals is the way they breathe. Most species of fish have no lungs and instead use gills to extract oxygen from water. Water enters through the mouth of the fish and is then passed over the delicate folds of gill tissue, where oxygen is absorbed. The gills are protected by a hinged bony cover called the operculum.

Most of the rest of the inside of a fish is essentially similar to the inside of a human. You'll find a heart, liver, stomach, intestines and kidneys, protected (in bony species) by a ribcage, with a brain and spinal cord to send signals to them. There is also a special organ called the pyloric caeca, which produces enzymes to help with the digestive process.

The lateral line is a sensory organ which runs the length of the fish's body, usually visible on either side as a slight indentation in the scales. It is extremely sensitive to vibration and is used to help the fish follow what's going on in the water around it, identifying things such as the location of other fish and the shape and direction of currents.

Most bony fish control their buoyancy using a special organ called the swim bladder. This is essentially a bag of gas which can be inflated or deflated. Think of it like a hot air balloon. When the balloon is full, it rises; when deflated, it sinks to the ground. The swim bladder enables fish to relax high up in the water without having to swim constantly to keep themselves from sinking. It is positioned above the stomach and gonads, so fish who have eaten too much or who are gravid with eggs sometimes have difficulty using it properly.

Fish sex is not always fixed the way it is in humans. Several species have the capacity to change sex spontaneously, increasing breeding opportunities. However, male and female reproductive organs are quite distinct. Females have a larger body cavity to contain eggs (and, in some species, fry), swelling noticeably when they are about to spawn. Males have a smaller organ which produces milt. In most species this is expelled from the body to fertilise eggs which have been laid externally, but in some cases it is inserted into the body of a female using specialised claspers (as in sharks and rays) or fused anal fins (as in many species of livebearer).

In most species of fish, milt and eggs are both expelled from the body through a small opening beside the waste vent, but in some species the female has an ovipositor, a long tube which gives her more control over where her eggs are deposited. This can enable her to place them in small spaces less easily accessed by predators.

Besides the organs described above, some species of fish have specialised organs which enable them to fill specialised environmental niches. These include the following:

Understanding their anatomy should be a basic part of the process of getting to know your fish, making it much easier to check on their welfare. It doesn't have to be complicated and it will help to make your hobby a more rewarding experience.