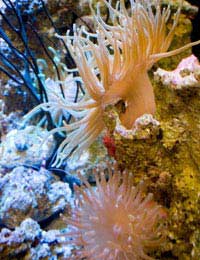 Finding the right substrate for your aquarium is more than a matter of choosing the right look - it can have a major impact on the well-being of your fish corals and plants. Rock can also be used for landscaping, constructing hiding places for shy fish and attachment points for corals and anemones. But the wrong kind of rock and sand can cause all sorts of problems. How can you be sure of making the right choices?

When adding rock or sand to your aquarium you should be aware that it could, over time, alter the pH of the water. This is because some types of rock will very slowly dissolve, changing the chemical composition of the water. This can potentially be a problem for your fish and it's one of the reasons why you should monitor the pH of your aquarium water on a regular basis. To be on the safe side, always buy your rock and sand from a fish shop rather than decorating your aquarium with material you've found in the countryside or on a beach.

When you position rocks in your aquarium you should be careful that they're not likely to fall over and injure your fish, especially if you have fish who like to dig and burrow. You should also avoid sharp edges which fish may cut themselves on.

The most common questions about rock in the aquarium pertain to live rock. What is this mysterious substance and why is it so important?

Live rock is not alive itself, but contains lots of other things which are: algae, bacteria and small crustaceans important to the ecosystem of your reef aquarium. It is composed of the skeletons of dead corals, giving it a large surface area for these small organisms to live on and for your anemones and live corals to attach to. The organisms in live rock form a vital part of the nitrogen cycle in your reef aquarium, effectively acting as a biological filter. They feed on the waste products of your fish. However, because they need to find a balanced place within the cycle of the tank, you should introduce live rock gradually, in small amounts, and should not try to support more than one and three quarter pounds of it per gallon of water. Arrange it so that the water circulates well around it to bring food and carry away waste.

Often live rock is badly transported, leading to the death of a lot of its inhabitants. Rock like this will smell bad and may have filmy patches, which should be removed. Ask your fish shop to supply you with cured or seeded live rock, which will contain a healthy biological culture. If this is unavailable, you can cure the rock yourself by placing it in an unlit but heated isolation tank until it revives and smells good (a process which usually takes about two weeks). Never place uncured live rock in your main aquarium, as its dead or dying inhabitants will release a lot of ammonia into the water, poisoning your fish.

People tend to think of sand as innocuous, but remember that it is essentially made up of very small rocks and, as such, can cause the same chemical problems that rock can cause. For this reason, it's important to use the right sort of sand in your aquarium. It's also important to choose the right size of sand grains. Large, rough grains can damage the skins of delicate fish, especially if they are burrowers. Some species of fish need a soft sandy substrate to hide in so that they can feel secure.

Many aquarists opt to use live sand, or sand made from crushed coral, which functions much like the live rock described above. Aragonite sand is the best choice, though it can be expensive, as it doesn't facilitate the growth of problematic algae. Whatever sand you use, you should move it around from time to time when cleaning the tank (unless you have the sort of fish who will do this for you), thus ensuring that unprocessed waste doesn't become trapped in it.

Establishing the right rock and sand in your aquarium may sound complicated, but it's really quite simple, and getting it right will make the aquarium much more successful in the long term.

Moss Balls in the Aquarium