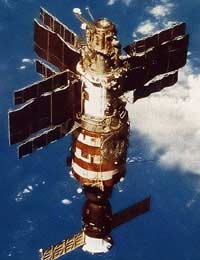 If the idea of fish in space sounds out of this world, it is! There have in fact been more fish in space than there have humans, and they have been instrumental in helping us to understand how the absence of gravity affects living organisms. Specially designed cylindrical aquariums have provided homes to several different species of fish who have also provided company for human astronauts.

The first fish in space was a zebra danio stationed aboard the Russian satellite Salyut 5 in 1976. After determining that this fish could survive, the Russians sent a group of guppies to the same satellite. They remained there for several weeks, during which they changed their behaviour and proved that fish could adapt to live healthily in the absence of gravity, at least in the short term. This paved the way for fish to participate in ongoing space experiments.

Other fish that have spent time in space include killifish, cichlids, swordtails and toadfish. The scientists working with them have prioritised small shoaling fish because they are happy travelling together in large numbers, even in a small space. They have also chosen species on the basis of their hardiness. There is a special aquatic environment on the International Space Station for visiting fish.

Fish in space have made important contributions to the study of balance disorders. This is because their inner ears are very similar to those of humans. In zero gravity, fish get disorientated and begin to tumble around. This isn't because they can't control their position, but because they can't work out what it should be. As they adapt, they are able to start swimming normally. They have to adjust again when they get back to Earth.

Scientists are still working with fish like these to determine whether adaptations made in space could result in long term problems back on Earth. Fish have pioneered the use of rotating space environments designed to provide artificial gravity, to see if this will help to counteract problems - if successful, it could become a feature of spaceships designed for human use.

Space fish can also help to provide information about bone damage in zero gravity. They share a key bone protein with humans and the studies may also help people back on Earth who are suffering from bone loss conditions such as those associated with old age.

Fish are now being considered as possible candidates for the first Earth animals to visit Mars. There are two key reasons for this. Firstly, experiments have demonstrated that they can successfully breed in space, so they could help us learn about the effects of reproduction in zero gravity and of reproduction on the reduced gravity of the red planet, including effects that may take several generations to become apparent.

Secondly, individual fish of many species can live for a long time, whereas other experimental subjects like mice and rats die within five years (the journey to Mars takes about seven months). Some fish species are also highly resistant to radiation, which could be a problem for space travellers without the Earth's magnetic field to shelter them.

Will our space explorations ever lead us to discover alien fish? That remains to be seen, but space scientists and oceanographers alike agree that the most likely place to find them is Europa, a moon of Jupiter. Although it has an icy crust, Europa is thought to have warm, oxygen-rich oceans underneath.

Although they would of course not be the same as fish from Earth, alien fish could be expected to share some features with them. This is due to a process called convergent evolution, whereby similar traits emerge in unrelated animals because they are shaped by common environmental factors. Like Earth fish, alien fish would probably have streamlined bodies and fin-like appendages for propelling themselves through the water.