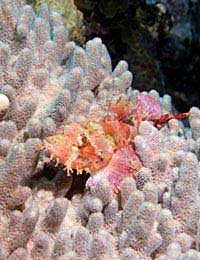 Of all the fish available for the marine aquarium scorpion fish are perhaps the most exotic. Many are vividly coloured, some are capable of changing colour, they have elaborate fins and they are covered with warts and spines. Calm in temperament and happy living alone, they are very well suited to aquarium life, but they should be kept only with caution, as they are deadly poisonous.

Scorpion fish are happiest in a rocky reef environment where they can easily camouflage themselves. Hiding places should be available, but some species prefer an open expanse of sand or mud in which they can embed themselves, so be sure to read up on the particular kind of scorpion fish you choose to purchase.

Scorpion fish are voracious carnivores capable of swallowing prey even larger than themselves. As a rule, they will accept any meaty food, though some may initially be willing to take only live food. Beware of feeding them goldfish on a frequent basis, as this can lead to obesity and other health problems. Shrimp and pieces of prepared seafood are a better choice. Impale these on a stick and wiggle them about in front of your scorpion fish to make them seem alive - it'll soon figure out what to do.Because of their appetites, scorpion fish are difficult to keep in community tanks. They can get along with lionfish and eels provided these are of an appropriate size, or can be kept in single-species pairs. If you choose the latter option, it's best to purchase them from the same tank, as strangers will not always get along.

Due to their tendency to lie still on the bottom, scorpion fish sometimes get algae growing on them. This is not usually a problem, as the fish will shed their skin to get rid of it if it becomes too prolific. Don't panic if you see a loose sheath of skin discarded in your aquarium.

There are several types of scorpion fish suitable for the home aquarium, most of them available in several different colour varieties.

Except when seizing prey, scorpion fish are not naturally aggressive. They use their venom only in self defence, as a last resort. Nevertheless, accidents happen, and no aquarist should try keeping these fish without a proper awareness of the risks involved.

If you are stung by your scorpion fish, you must seek medical help immediately. Sometimes the sting will hurt and swell but not appear to do anything else - however, people suffering stings like this sometimes get into severe trouble later due to tissue necrosis and secondary infections of the wound, so it's vital that you et it properly treated. If possible, whilst waiting for help to arrive, use tweezers to remove any pieces of the fish's spines which are lodged in the wound. Don't touch these with your fingers. Place the wound into water as hot as you can stand, as this will slow down the effects of the venom and help to relieve the pain.

In the aftermath of a scorpion fish sting, one of the infections which you risk developing is tetanus. For this reason, if you choose to keep scorpion fish, you should make sure that your tetanus vaccinations are always up to date.

Scorpion fish are not for the beginner, but if you're suitably careful with them they can make a fascinating choice for your aquarium. You certainly won't find many other fish as spectacular or as bizarre.