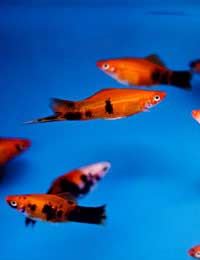 Brightly coloured, lively and playful, swordtails make a great addition to any tank. Though they prefer slightly brackish water, they're highly adaptable and can also be kept in freshwater tropical aquariums where they get on well with most other species of fish.

Swordtails are named for the elongated, sharp-looking anal fin and lower part of the tail on the males. They are non-aggressive but they love chasing, so it's best to keep them in groups of five or more, in which case they'll chase each other and leave other fish alone. Keeping more females than males reduces the chance of sparring over breeding opportunities, but this rarely gets nasty anyway. They're basically friendly and sociable fish. However, because they love jumping, you'll need a sturdy lid on your aquarium, ideally with a piece of net stretched beneath it so that they bounce back into the water without bruising themselves.

Swordtails will do well on most basic aquarium foods, but to keep them in tip top condition it's advisable to include some vegetable matter in their diet. Vegetarian flake foods or algae discs will do well, and you can offer small pieces of fresh cucumber for a treat.

Most swordtails grow to between four and five inches in length, with females tending to be slightly bigger than males. Occasionally older females will change sex, taking on the physical characteristics and behaviours of males, but they are usually infertile.

Most swordtails are easy to breed, but it's quite a bit harder to preserve the offspring. Breeding swordtails requires careful attention. If you're to do it successfully you'll need to be able to drop all other commitments and be there when your fish gives birth.

Swordtails are livebearers who will breed quite happily within a community tank. When pregnant, the females start to swell up and develop a spot on the belly in a contrasting colour. It's difficult to know when they'll give birth as swordtail fry and quite often born prematurely - premature fry can still survive and grow, but are more likely to suffer defects. For this reason you may need to get to know an individual female in order to be properly prepared. Females who have been impregnated once will use stored sperm to produce more fry approximately once a month.

The easiest way to preserve the fry is to place the pregnant mother in a separate spawning tank with lots of weed or netting for the newly released fry to hide under. Be ready to remove the mother as soon as she's finished giving birth, or she will eat her own offspring.

Swordfish are hardy and adaptable fish easy for beginners to keep, but with their bright colours and fascinating behaviours they also have lots to offer to the experienced aquarist.

Adding Octopuses To Your Tropical Fish Tank
Share Your Story, Join the Discussion or Seek Advice..
I have a female swordtail who's wider than she is long.The bloating is severe.I've heard that peas may help.Does this mean green garden peas?Cooked or raw? She's the last swordtail of the school I bought a couple years ago.She's been doing fine, but increasing in girth, similar to the Willie Wonka scene (in the original movie). If I could post a picture, I'd do it. Doug
Doug - 25-Nov-17 @ 1:24 AM
Title:
(never shown)
Firstname:
(never shown)
Surname:
(never shown)
Email:
(never shown)
Nickname:
(shown)
Comment:
Validate: